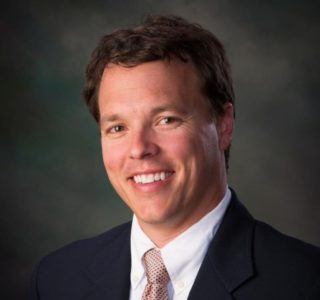 Ames Barnett was born and raised in Washington, Georgia, and was taught at an early age the importance of serving one’s community.  Ames’ grandmother, Mildred Barnett, was the first woman elected to Washington’s City Council and his great uncle was the late State Senator Sam McGill.

Through hard work, a dedicated workforce, and the addition of three new divisions, Ames grew Barnett Southern Corporation into a prosperous business that is today known for its quality work and superior service for its customers.  Barnett Southern Corporation was honored as the 2014 “Big Business of the Year” by the Washington-Wilkes Chamber of Commerce. Governor Nathan Deal appointed Ames to serve on the Georgia State Workforce Investment Board in 2014.

Ames, his wife Ashley, and their three children, Porter, Turner, and Barron, live in Watkinsville.  When Ames isn’t walking a job site, you will find him coaching his sons’ Little League Baseball and Little League Football teams.  The Barnetts attend Prince Avenue Baptist Church in Athens.