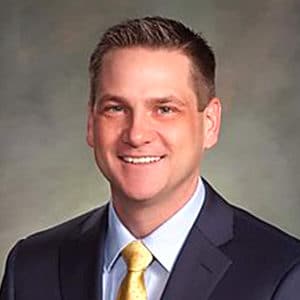 Bo Biteman is a “Constitutional Conservative” Republican State Senator who represents Wyoming’s 21st District (Sheridan County).  Senator Biteman was first elected to the Wyoming House of Representatives in 2016, serving a two year term there before making the move to the Senate in 2018. He is a staunch defender of free markets, the Constitution, federalism and individual rights. Bo knows freedom! He is often touted by the media as “one of the most conservative legislators” in Wyoming and has racked up awards for his conservative voting record from the American Conservative Union and Principles of Liberty. Bo is well known for being a budget hawk and prides himself on being the voice of the taxpayer in Cheyenne, calling himself the lobbyist for the working men and women of Wyoming. In his short time in Cheyenne, Senator Biteman has also garnered recognition as a champion for survivors of domestic violence and sexual assault for his work on their behalf, as well as earning respect from his colleagues for his willingness to listen, kindness and bipartisanship. Bo pursues excellence and brings expertise and high standards to everything he does. As a Certified Professional Landman (CPL) with over 16 years of experience in the oil, gas, and mining industry, he has attained the industry’s highest designation of certification for Landmen. Bo knows firsthand the challenges we face regarding the cyclical nature of the coal, oil and gas industries and how government overreach and job killing regulations negatively impact our state and local communities. Senator Biteman currently serves on the Senate Minerals, Business and Economic Development Committee, the Senate Revenue Committee, the Select Federal Natural Resource Management Committee, and the Management Audit Committee.  Bo and his wife Mercedes have two daughters, Alyssa (10) and Holly (8). The girls are involved in hockey, ballet, softball, swimming, and 4H. Bo is also a volunteer firefighter with the Tongue River Fire Department in Ranchester.  Once you get to know Bo, you’ll soon find out he is passionate about sports and the outdoors. He loves to be in the mountains hunting and fishing. Bo is a tireless protector of the right to keep and bear arms, and will never compromise your constitutional rights, period.  With Bo you know what you’re getting: honesty, integrity, family values, and passion for doing the right thing; leadership with a genuine love of Wyoming, its people and its values.