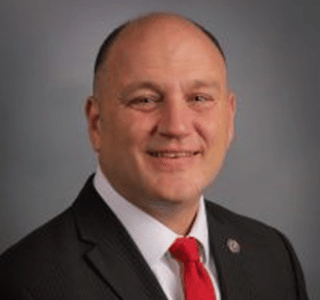 Senator Denny Hoskins, represents District 21 in the Missouri Senate. In 2016, he was elected to serve in the Missouri Senate. He was elected to the House of Representatives in 2008 and elected to the office of Speaker Pro Temp in 2013.  Senator Hoskins is a Certified Public Accountant (CPA). In addition to his legislative duties, he is a Consulting Manager with The Tidwell Group, a full-service accounting and consulting firm specializing in the real estate and construction industries.

His favorite hobbies include coaching youth sports, fishing, hunting, traveling, running, golfing, basketball and softball. Senator Hoskins lives in Warrensburg with his wife, Michelle, and they are the parents of Cole, Amelia, Miles, Haile and Andrew.