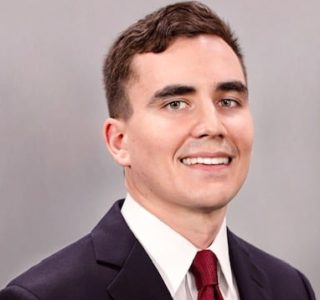 Jack Whitfield is a veteran of the U.S. Army and a JD candidate at Georgetown University Law Center. Born and raised in Kentucky, Jack graduated from the University of Kentucky in 2016 with a B.A. in Political Science. While there, Jack interned in the U.S. Senate and spent a year studying at Harvard College, where he frequently wrote for the Harvard Political Review.

In 2017, Jack enlisted in the U.S. Army. After commissioning from Officer Candidate School, Jack completed training as an infantry officer and subsequently graduated from the U.S. Army’s Ranger and Airborne Schools. Jack was an infantry platoon leader in the 82nd Airborne Division at Fort Bragg, NC, deploying to Iraq and Syria in support of Operation Inherent Resolve.

After exiting active duty in 2021, Jack and his wife Kathleen moved to Washington, D.C. Motivated by a lifelong interest in the intersection between the law and politics, Jack decided to study the law in our nation’s capital. Jack is a constitutional conservative with a strong desire to serve the community that raised him. Jack enjoys running, cheering for the Kentucky Wildcats, and his wife’s Auburn Tigers, and assisting veterans during their transition to the civilian sector.