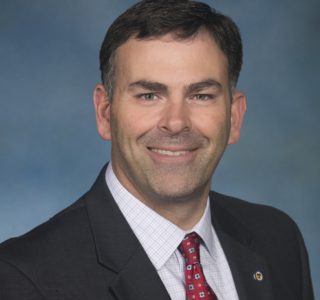 Secretary of State Michael David Watson, Jr., was born and raised in Mississippi. He is a husband to his loving wife Lauren, father of three beautiful young daughters, the son of a shipyard worker and bank teller. After his work as a pipefitter, Michael’s father entered the ministry and continues to serve as pastor at Liberty Church in Gautier. His mother passed away shortly before Michael became Mississippi’s thirty-sixth Secretary of State.

A graduate of Pascagoula High School and the University of Mississippi, where he earned a Bachelor of Business Administration degree and a law degree, Michael began his work in public service in the summer of 1999, serving as an intern for then U.S. Senate Majority Leader Trent Lott. That experience strengthened his desire to one day enter public service in order to improve the quality of life for all Mississippians.

Prior to taking office as Secretary of State in January 2020, Michael served three terms in the State Senate, where he represented District 51 in Jackson County. He authored the Fetal Protection Act, which strengthened the penalties for injuring an unborn child. He also wrote Mississippi’s first comprehensive law to tackle illegal immigration, as well as legislation to allow alternate-track diplomas—one of the first efforts to return a focus to career and technical training for high school students. More of Michael’s proposals came to fruition in the State Senate, including the Catastrophe Savings Accounts, which allows for pretax savings accounts to be used on deductibles or other catastrophe-related expenses, and the Equal Opportunity for Students with Special Needs Act that provides scholarships for parents with a special-needs child, allowing them the ability to choose which education option best fits their child. In addition, former Governor Phil Bryant asked Michael to introduce the legislation adding “In God We Trust” to our state seal. During his time in the State Senate, Michael became known as a conservative fighter for his work to preserve Mississippians’ rights and religious liberties and to limit government overreach and spending. Michael brings these same conservative principles to the Secretary of State’s Office.

As Secretary of State, Michael is focused on protecting the integrity of our elections by emphasizing the importance of clean voter rolls and continuing strong enforcement of Mississippi’s Voter ID law. Since taking office, he’s fought to push legislation to ensure only United States citizens are registered to vote in Mississippi. Michael is also dedicated to bringing about a more efficient and effective state government by working to reduce regulations and red tape so small businesses can grow and flourish in a free market economy. During his first year as Secretary of State, he launched the Tackle the Tape initiative, which aims to help increase economic opportunities for all Mississippians by promoting competition and encouraging innovation and job growth.

As a native of the Mississippi Gulf Coast, Michael understands the importance of properly managing Tidelands and other public lands. He is committed to keeping the decisions in the

hands of local officials as much as allowed by law while monitoring these decisions to ensure Mississippians receive fair value.

During his time in the private sector, Michael opened his own firm where he focused on business law, construction law, and probate law. He is a member of the National Rifle Association (NRA), the American Council of Young Political Leaders, the Mississippi Bar Association, the Ole Miss Alumni Association, and the Ole Miss Hall of Fame. He and his family spend time volunteering with the American Heart Association, American Cancer Society, and the Dream Program. As a dedicated family man, Michael and his wife, Lauren, have three daughters—Gracie Pierce, Annie, and Cora Elizabeth. The Watsons are members of First Presbyterian Church in Pascagoula and enjoy visiting church families all over Mississippi.