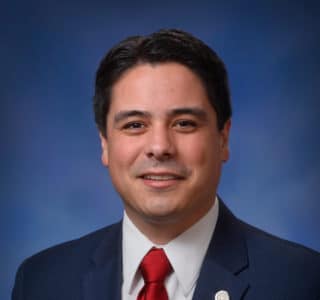 After studying Architecture and receiving a Master’s of Architecture from Lawrence Technological University in Southfield, Michigan in 2009, Shane Hernandez came home wanting to be more involved in his community. By 2012, he had run for County Commission, become the Chair of St. Clair County Republican Party, and joined the Blue Water Tea Party. After a brief stint as Chair of Blue Water Tea Party, Shane ran for the House of Representatives in Michigan’s 83rd District. He served 4 years in the state house and became the first Hispanic Appropriations Chair in the history of Michigan and was named Michigan’s most conservative legislator in 2017.

Following an unsuccessful bid for Congress, Shane started working as the Director of Strategy for Michigan House Speaker Jason Wentworth. Today, Shane is the Caucus Services Director for the House Republicans while also working on two side projects, Carr and Hernandez Properties LLC, a property management and development start up, and Hernandez Design Studio LLC, a residential design firm. He also started a political activist group called Hope Rising which focuses on people like himself, who because of the national narrative, believe they are Liberal, but their core values are actually Conservative. Hope Rising is focused on reaching people by spreading free market, conservative principles through action rather than arguing policy.

Shane is married to Renee and they have two girls, Kelsey and Kara. They attend Lakeport Wesleyan Church and are involved in multiple Christian non-profits including New Life Christian Academy, Operation Transformation and Save Our Neighborhoods and Streets (SONS) Youth Outreach.